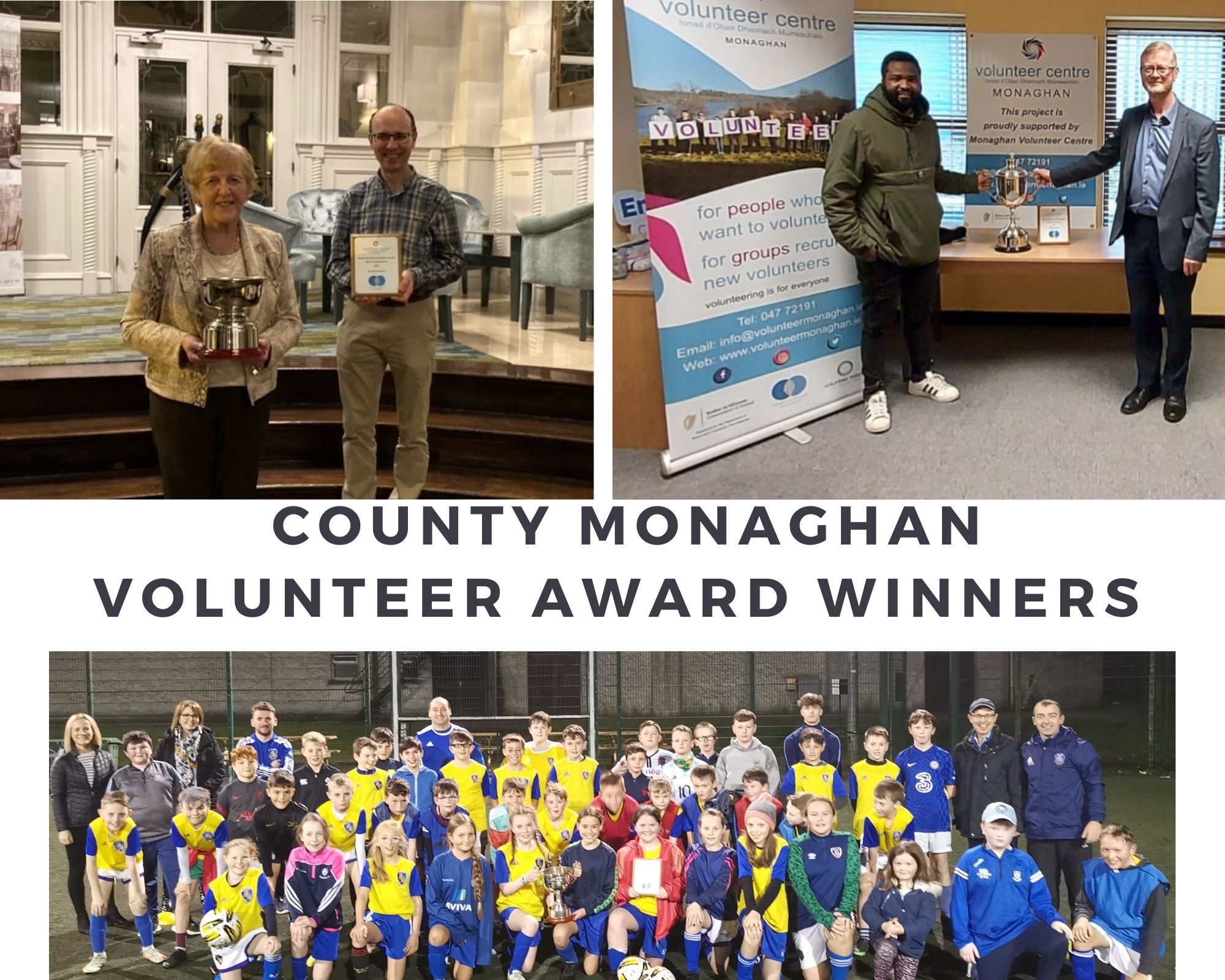 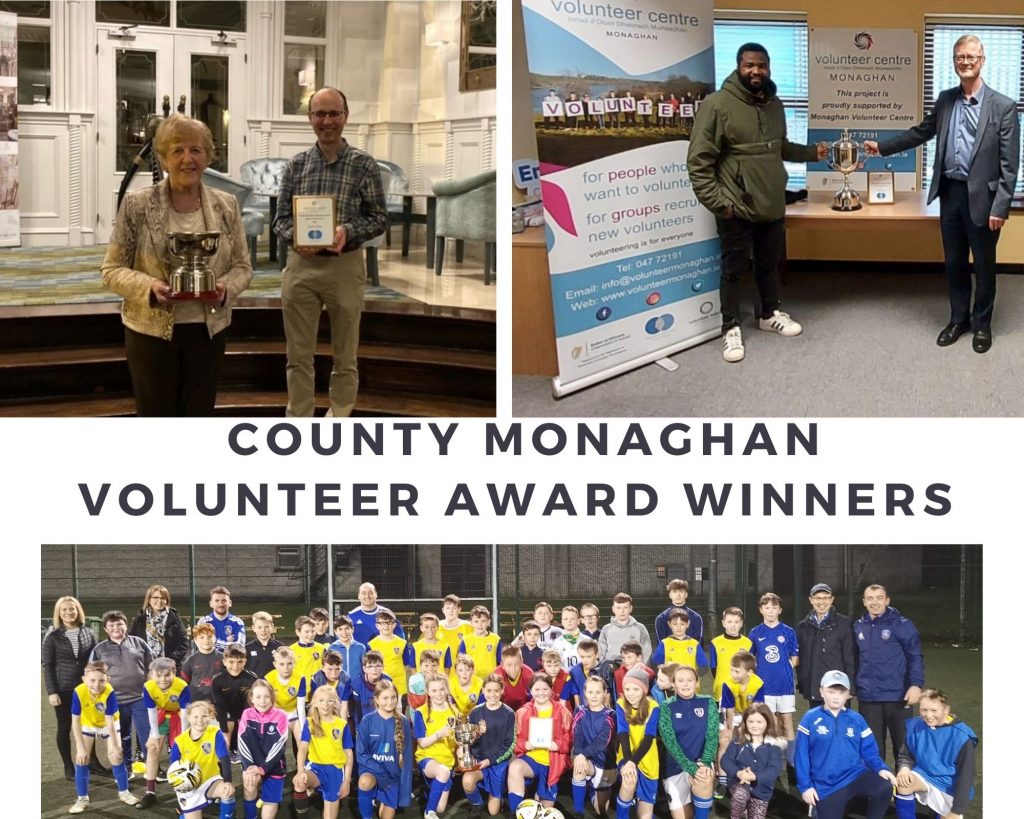 Monaghan Volunteer Centre and Monaghan Integrated Development (MID) are delighted to announce the winners of the County Monaghan Volunteer Awards 2021. This year three awards were presented; Volunteer of the Year; Lifetime Achievement Award and Volunteer Group of the year.

Gabriel O’Connell, MID CEO said “The Volunteer Awards, seek to recognise and celebrate the efforts and achievements of volunteers across County Monaghan. In the past 18 months, the profile of volunteering has risen significantly due to the Covid pandemic. Many groups supported by volunteers had to close and/or adapt their services. Their volunteers have had to be patient and innovative. Now new services have been developed and grown which is a testament to the dedication of these volunteers. One of the few good things to emerge from Covid is the fact that it has highlighted the importance of volunteering for community life.”

Liza Hackett of Monaghan Volunteer Centre told the Northern Standard, “This year we received a broad selection of nominations from across the county to recognise those who have been volunteering in their communities. Nominations were accepted by application, and judged by a panel based on the information provided in the application. Each winner received a perpetual award trophy in their category as well as a plaque and a financial donation for their chosen organisation.”

The Volunteer Group Award recognises the achievement of a non-profit group in attracting and retaining a wide range of volunteers and directing their efforts for the benefit of others. Blayney Academy FC have been running for over 10 years years and approximately 1,430 young people from County Monaghan have availed of coaching and matches with the support of the clubs volunteer team. They aim to provide football to all children and through the game of football, endeavour to help build children’s confidence and skills in a fun and safe environment. Currently they have both girls and boys teams of various age ranges, and have won many prestigious football awards throughout the years as well as organising great experiences for members such attending a Champions League semi Final between Bayern Munich and Barcelona women’s teams. Training takes place every week and games held at the weekends.

Players coming through Blayney Academy FC would not have had these opportunities if it wasn’t for Barry Dolan and the team of volunteers at the club. The club has a strong team of over 20 volunteers ranging in age from 15 years to over 55. Volunteers are drawn from across County Monaghan and they carry out a variety of roles such as coaching, board member roles, parent volunteers & pitch side photographers & videographers.

Volunteer of the Year – Ndala Lokendo

The Volunteer of the year award recognises the voluntary work of an individual of any age during the course of 2021. Ndala Lokendo is a volunteer with the Youth Intercultural Network. This is a group for young people aged 12-20 years old. Members are drawn from all genders and the group includes young people from indigenous Irish, migrant, asylum seeker and programme refugee backgrounds. Ndala, who is a Community Youth Work student, has been volunteering with the group for some time, often sacrificing his college holiday time to support the young people in their activities. The Network provides members with a safe space to gain confidence and be empowered. With Ndala’s support, the Youth Intercultural Network were able to complete a variety of projects, including a big Summer Street Art project. Ndala has also been very active in promoting the group and supporting the leaders to recruit new members. Jacqueline O’Rourke, Community Worker with MID stated “He is a positive role model for the young people, who all love and respect him. He brings an enthusiastic energy to the Network – which is contagious and the young people pick up on.”

The Volunteer Lifetime Achievement award recognises the voluntary work of an individual or a group of volunteers over an extended period of time. This year’s recipient, Rosaleen Molloy, has been actively volunteering in a variety of organisations for over 20 years. She is currently PRO for Monaghan Special Olympics Club, Treasurer for Tydavnet Faith & Light and a Trustee on the Monaghan Branch of Parents and Friends. As well as volunteering on various committees Rosaleen also provides practical support to the many organisations she supports, such as Special Olympics Monaghan, Shop Assistant with St Vincent De Paul Monaghan, Annual pilgrimage to Lourdes, Comhaltas Ceotoirí Eireann & Gerry Whelan Traditional Irish Music Festival. She is often found baking for parties and events, taking on secretarial and organisational duties, stewarding and helping to supervise at events and trips.

Rosaleen’s nomination particularly noted her role as PRO with Special Olympics Monaghan during the difficult times the group has faced due to Covid restrictions. It stated that Rosaleen “continues to provide a strong link and reliable channel of communication between all club members, which is especially vital for the athlete as presently most club activities are on hold.

It also pointed out how her dedication to the Monaghan Parents and friends committee has seen her braving the ice cold water of Emy lake on a Christmas morning with her son Sean to raise money for the group.

The manager of Monaghan Volunteer Centre, Francis McCarron, thanked the VC Team of Grace Sherry and Liza Hackett, as well as the judging panel for all their hard work on this year’s awards. He stated, “They had the difficult task of selecting three winners from a pool of very worthy nominees. Luckily for our county and our communities, when people volunteer, everyone is a winner!”

Supported by the Department of Rural and Community Development